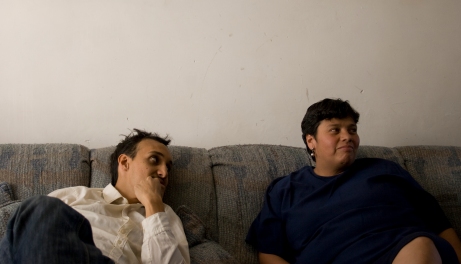 For its inaugural program Latitude is thrilled to present the work of Nicolás Pereda, a young, prolific and critically acclaimed Mexican Canadian filmmaker. Pereda was born in 1982 and studied film at York University in Ontario. His work has competed at the Cannes, Locarno, Venice, Rotterdam, Toronto and San Sebastián film festivals and been featured in retrospectives at Anthology, Harvard and Pacific film archives among other internationally recognized institutions.

Pereda has directed seven features as well as a number of short and documentary films since 2007. His production house’s name, En Chinga Films, might reference his unabating creative output. However, it also points towards the working-class characters that populate his films running errands, doing, looking or waiting for menial jobs and having each other in an emotional short leash. Mainly concerned with daily life and its ordinary affects, Pereda’s oblique stories run opposite to his production pace.  His vision becomes neither nostalgic nor contemplative; there are as many events as atmospheres. Both events and atmospheres demand time to sip in and take shape: wait for grandma to die, the fridge to work again, dad or the dog to return, a call to come through, the brother to finally show up, the girl to have enough. Pereda dwells on such time unobtrusively.

With an austere aesthetic, he is then free to embark in a playful exploration of documentary and fiction, cinema and theater, rehearsal and improvisation, repetition and difference. What remains is life and its things overtaken by silence.

Pereda on Pereda: Fassbinder and his readiness to shoot:

“I’d love to take that idea further. I’d move to Mexico and it’d be routine to start shooting anytime. We wouldn’t have dates for shoots; we’d play it by ear. Life would become so impregnated with work that we wouldn’t be able to tell when we were filming and when we were not. We’d never be done.”

Pereda’s first feature while completed as his graduate project at Toronto’s York University is already a solid statement of his formal explorations and narrative concerns. The missing stories alluded in the film’s title are those of Mexico’s underclass: seemingly unhurried poor peasants and domestic servants. Vicente wrangles cattle and looks after his ailing grandmother in the state of Puebla, Mexico. His uncles living in Texas rush back as news of her imminent death reach them. The absence of Teresa, Vicente’s mother, creeps as a sign of aloofness until the reasons behind her brothers’ prompt return are revealed. Ignored by local authorities, Vicente travels to Mexico City to find her mother, who works as a maid, and a lawyer, who they can’t afford. The facade of her employer’s benevolence crumbles slowly as Vicente is suspected of robbing a camera and Teresa is asked to perform duties beyond her occupation.

The film introduces Pereda’s’ recurring hapless mother-and-son duo whose laconic performances emphasize elements of his style: long takes, handheld and mobile, an inclination for medium shots and compact compositions as well as an aptitude for formal play grounded in honest evocations of place.

Luisa and Gabino live in a small apartment in Mexico City always shadowed by Paco, Gabino’s crony and their de facto roommate. The friendship seems unencumbered by the same things drifting Luisa and Gabino further apart: Paco freeloading on food, cigarettes and space, their dog Junto missing, scalding water coming out from every tap and a broken refrigerator. Through these narrative rouses and his formal constraints (long takes, limited camera moves, subdued lighting) Pereda allows his actors to construct rather than a story a life-like atmosphere of tension, comic relief and anticipation. What remains is the portrait of a couple in chronic disrepair. As a last resource, they flee from their cramped apartment to the countryside in search of Junto and each other.

Centered on the relationship between Gabino–the character from Together, only now driving a moving-truck, swindling naïve posh guys, and still dating Luisa–and his mother Teresa, the film captures not only their daily life in the city, but the ordinary as lived by many different characters who, regardless of their age or social standing, all seem to be waiting for something to happen or change. Thus we watch a grandmother that sings, a son that never shows up, a wife that unexpectedly wants a divorce, basketball games between co-workers loitering. Contemplative and cleverly humorous, Perpetuum Mobile captures the plane and matter-of-factly dailiness, with its repetitions and mysteries.

Apart from the obvious connection with Summer of Goliath’s story, this second projection strives to emphasize the centrality of Interview with Earth in Pereda’s oeuvre as it brings forth many of his creative devices.

Emilio returns home after fifteen years of absence. His son Gabino and his wife Teresa greet him bewildered. After spending less than a week together, they decide not let him stay in the house any longer. By the time they are prepared to break the news, Emilio has already departed. What is fiction and what is real, who are the actors and who are the characters? On and off, the film presents one and the other, blurring their lines; the answer doesn’t really matter. Thus, Gabino the character memorizes the names of Mexican pop music’s greatest hits, while Gabino the actor remembers how he learned about his mother’s death. A mix of documentary, fiction, and the process of film-making, Greatest Hits explores family relations, absence, and coming together in a captivating game of doubles.

Geli, Elizabeth, Eli, Araceli, and Alicia are only five of seventeen women that live together in an old, wrecked house where they receive full-day training to become nannies, nurses, or domestic workers for the Mexican upper class. Practicing over and over their tasks and exercises –from adequately cleaning presumably disabled bodies to making the perfect bed (no wrinkles, exact matching edges)– these women of all ages have to prove their skills to the voice throwing orders from behind the camera. A sober yet pinching portrait of domestic servitude in Mexico, The Palace confronts the viewer with social inequality and power relations, creating a political critique of labor, gender, and class. Apparently distant and unaffected, the camera stands as both witness and executioner, questioning the viewer’s own standing.

An experimental video, All Things Were Now Overtaken by Silence is the “anti-making” (in the words of J. Ayala Blanco) of a public television filmed play. The play (First I Dream, mise en abyme) is a monologue of Sor Juana Ines de la Cruz’s poem First I Dream featuring actor, director, playwright and performance artist Jesusa Rodríguez. Probing the creative process of filmmaking, the work documents its mundane and humdrum side: the meticulous search for an specific frame or light and shadow effect, the Baroque location enveloped by the modern city, the shooting schedule folded by nature’s whims. Pereda borrows Sor Juana’s insights on knowledge and perception to describe his cinematic inquiry: “First obscurity and silence. Then an initial light, a body; eventually, the word, and then, little by little, music, landscape and nature.”